Harriet and Spencer Fall in Love 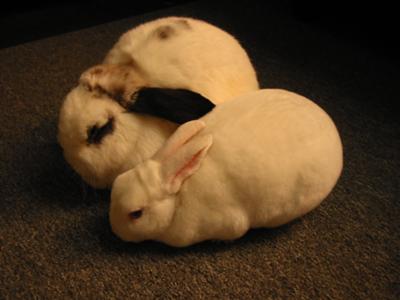 Harriet and Spencer lounging around

When I was 18, a friend's mom gave me a rabbit. The rabbit had no name and had been living outside in a hutch exposed to the New England weather for nearly two years. She had been purchased as a baby for young kids who grew bored with her.

She moved into my bedroom with me and it was love at first sight! She is very social although she doesn't like to be picked up (which is a common bunny trait). I got her fixed and she got to hang out with my friend's male bunny, George.

On March 23, 2004, George passed away. We have no clue why but we suspect he was old since my friend had had him for a few years and got him as an adult. Harriet seemed lonely and down. Her favorite seed treats which she had always gobbled up would be left lying in her food dish.

It had always been my plan to get Harriet a new boyfriend. I found an albino rabbit on craigslist. Albino rabbits are typically not as popular as other rabbits because of their red eyes so I decided to get an albino. It wasn't instant chemistry but after a day, Harriet and Spencer fell in love. They are still together to this day.