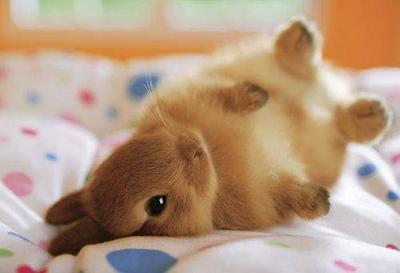 When i was younger, my friend and I went into the pet store and saw these two very tiny cute baby bunnies. On a whim we decided to buy them both, with cage and supplies. For a few days we played with the bunnies and laughed as they ran happily around the living room.

But we soon realized that potty training the bunnies wasn't going to be as easy as the lady at the pet store had made it out to be. Not only that, but my roommate's interest in the bunnies faded rather quickly, and as they were kept in my room, i ended up being the only one taking care of them and cleaning their cage, which i got sick of very quickly. Now the girls at this pet store had properly handled these baby bunnies since they were born, and they were very sociable...You could tell how smart they were, and how communicative.

But one day the inevitable happened. We all got drunk during the middle of the day and decided that it was time for the bunnies to go. It was a day I will regret for the rest of my life.

The night before this happened, I had gotten into a fight with my parents over the phone. After i hung up, I sat on the floor crying and took out my bunny. He could sense that something was wrong and he climbed onto my lap, putting his nose close to my chin as if to say, "It's alright. I am here."

Both bunny bodies went into the dumpster. My friends and I never talk about that night that happened over 20 years ago when we were kids, but that scream of that kind sensitive bunny still haunts my dreams...looking at me pleadingly with confusion, wondering why i had decided to turn on him in such a painful fashion. "ah he was only like 5 bucks" i said to myself, ignoring the nagging pain in the back of my mind that made me want to cry for that poor helpless little guy, who had been there for me when I was the one who was in pain. Maybe in another life bunny.